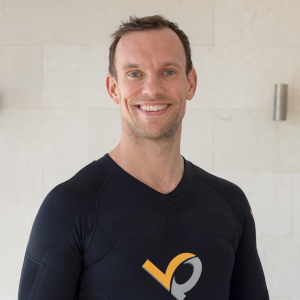 Hi, how are you doing?

Last week I sat together with one of the founders of the visionbody ems system, Christina Schmidt, and she told me this story about the history of ems training and its effects. This will blow your mind…!

Ems got a way longer history than you might expect!? Electro-stimulation has been used for centuries, though not in the way we now know it. More than four millenniums ago Egyptians were already using fish that generate electrical discharges for the treatment of various pathologies. Visionbody does not advise the usage of electric eels, catfish, or torpedo fish in any type of treatment plan. However, the human experience of using and recognizing electrical stimulation carefully applied is a benefit to human healing, is as old as recorded history.

Even though using this type of electrical discharge from fish was practiced by the Egyptians and Greeks, and subsequently, by the Romans, it wasn’t until the middle of the 20th century that electro-stimulation was used effectively in the world of sport. In the 1960s, what came to be known as ‘Russian Currents’ began being used in sport science. At that time, Soviet athletes were subjected to almost tortuously intense electrical discharges to try and gain an athletic edge.

In the 18th century, Luigi Galvani demonstrated that passing an electrical current through the spinal cord of a frog caused muscle contractions. This experiment was repeated in many universities compounding the result that electricity had the capacity to generate muscle contractions. Though it surely wasn’t known at the time why exactly the muscle contracted when an electrical current was passed through it. The nervous system had an essential electrical component that the human being generated, which permitted them to control their motor actions and it was possible to obtain this movement with electricity.

Today, it is elementary to consider that it is the brain that generates the electrical impulse and that it is the nerves that transmit this impulse to the muscles, therefore permitting us all types of movement. However, during the time of Galvani and Volta, during a time when instruments were not sensitive enough to measure the small amount of electrical energy circulating in the nervous tissue, these scientists demonstrated, with meager means and equipment, that electrical energy did exist in anatomy. And also that it was the same type of energy which produced lightning, or presented when a bar of amber was rubbed. It could be said that these geniuses provided an opportunity for the studies of branches of medicine such as neurophysiology and neurology.

At the end of the 19th century and the beginning of the 20th century, a series of advancements were made which were to make the usage of electro-stimulation easier, as a therapeutic element, as an effective treatment of multiple pathologies, and especially for the treatment of pain.

The various advances converged and bit by bit the possibility to use electro-therapy as a useful physical therapy emerged. As a result of studies, new forms of currents appear; interference, diadynamic, and iontophoresis. Knowledge in neurophysiology is advancing by leaps and bounds; how muscles respond most efficiently to electrical impulses are discovered daily; the importance of the frequencies for the stimulation of slow and fast muscle fibers are unlocking; information technology is advancing, and the control and adjustment of equipment improve all the time. Before one would need a twenty-kilogram electro-stimulator for treatment, these days the same results can be obtained with portable and ultra-light equipment which fits into the palm of a hand.

“The Golden Age of the electro-muscle stimulation has arrived. Visionbody brings this state of the art, German engineered technology, to the fitness world with the latest and most advanced system in FEMS and NMES.” – C.Schmidt, Founder

What did I tell you, huh? Awesome isn’t it?

Well, you should try ems on your own! We at Visionbody always like to say, you have to do it before you believe it!

I Am Here Because of You

I hope you got a lot from this article and be able to start safe and sound with your Functional EMS Experience!? Remember, i am here to help! If you have any training related questions or need to know more about specific topics please sent me a message and tell me how i can help you!

We got the best EMS Suit in the industry. No doubt. But it does not mean anything if you do not know how to use it right and reach your goals…!

So let me know if there is anything i could assist you with!

Write me an Email: j.knabe@vision-body.com

All the best. We talk soon…

Customers within the EU receive the order/invoice without tax after registration with your tax number.